It is with great sadness that I have to report that Eddie Carpenter has passed away overnight.  He had informed us that he was terminally ill with cancer a short while ago.  While his death may have been expected, it is still a very sad loss to the Society and he will be sorely missed.

Eddie has been a very long-standing member of our Society and always provided us with his monthly astronomical anniversaries.  He also gave us a number of lively talks on a wide variety of topics and even set us some observational challenges.  I still remember him challenging us to observe Sirius B not too long ago.

He was a keen observational astronomer as well as being very knowledgeable about historical characters and developments in astronomy over a long period.  He was a real character with a lively and friendly nature and was always most enthusiastic about astronomy.  He also had a notable collection of old astronomical volumes and talked to us about some of them at our last Zoom meeting.

Eddie was also a prominent member of the British Astronomical Association.

We will greatly miss Eddie’s lively input to our Society, while retaining fond memories of his many years with us.  Our sincere condolences go to Jackie, his wife.

The latest Mercury newsletter is now available, the September / October 2020 issue can be downloaded from the Digital media | Mercury page. 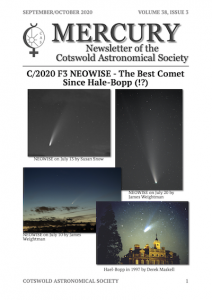 The latest Mercury newsletter is now available, the July / August 2020 issue can be downloaded from the Digital media | Mercury page. 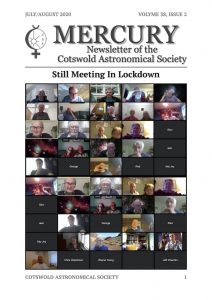 The latest Mercury newsletter is now available and members can download the May / Jun 2020 issue from the Downloads page. 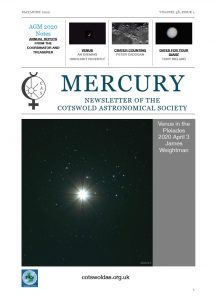 As a result of the Coronavirus pandemic we have had to curtail the speaker calendar for the foreseeable future, which has led to our events organiser, Mark, putting together a webcast that was broadcast to society members on the 11th April in lieu of the AGM.

Many members enjoyed the broadcast and a few have asked if a recording could be made available. This has now been done, so if you missed it you can view the presentation via the link in the members area.

The latest Mercury newsletter is now available and members can download the Mar / Apr 2020 issue from the Downloads page. 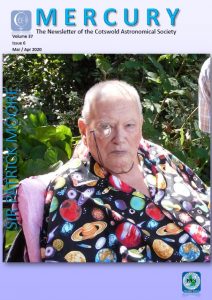 As a precautionary measure against the coronavirus the meeting on the 14th March has been cancelled. We hope to rearrange for Chris Lintott to deliver his talk later in the year.

Astronomers have got very good at finding planets around other stars.
From planets with twin Suns to evaporating Jupiters, and from lava
worlds to giant diamonds, the variety of planets we now know about
would put any science fiction series to shame. This talk, from Chris
Lintott reviews the latest discoveries, and explains what these
thousands of strange and unusual worlds change how we think about the
Universe.

On the 10th October this year Norman Pomfret will be delivering his talk to us.

An introduction to Radio Astronomy begins by contrasting this modern day science with the classics, then discovery of Radio Waves and the personalities involved are acknowledged. This is followed by the accidental discovery of a new science that is now referred to as Radio Astronomy.   To set the scene for later topics several several examples of modern day physics are considered then, a few very important discoveries are introduced.  One of those is at the fore front of modern day medical science.

Now retired from project engineering of electronic systems, he has focused his widespread interests in Astronomy, Earth Science and Radio Communication under the umbrella of Radio Astronomy.  He is a Trustee of the UK Radio Astronomy Association.  Currently he is developing with friends a Schumann Resonance Sensor for the amateur observer.

This presentation supports the outreach aims of the UK Radio Astronomy Association.

The latest Mercury newsletter is now available and members can download the Jan / Feb 2020 issue from the Downloads page. 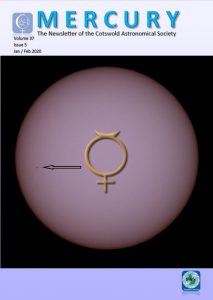 Lunar astronomy is an idea that's been around since the 1960s, but new engineering and technology is at last making astronomy on the Moon a real ... [...]

David Malin Awards honours Between a Rock and Outer Space, capturing the beauty of the night sky
29 July 2021

Operation scientist at the CSIRO Parkes Observatory and administrator for the Central West Astronomical Society, John Sarkissian, said it was shame ... [...]

The Chankillo observatory allowed for remarkably accurate astronomical ... It is the cradle of astronomy in America,” Ghezzi told AFP on a visit to the ... [...]

Vedic astronomy talks of 27 or 28 stars/star groups known as nakshatras and uses them to mark the position of geocentric planets and comets, etc. [...]

“Gravitational-wave observations are revolutionizing the field of astronomy and our understanding of compact objects,” said University of Birmingham's ... [...]

“Based on astronomical observations, 'Oumuamua turned out to have ... or communications dish, which would fit the astronomical data rather well.”. [...]

Here's everything you need to know about the Lunar Crater Radio Telescope, the Ultimately Large Telescope, FarView and the Gravitational-Wave ... [...]

The world's most important scientific facilities, from the CERN Large Hadron Collider to the National Radio Astronomy Observatory, deal with massive ... [...]

Astronomers, after years of observing a pair of Jupiter-like exoplanets ... a giant radio telescope installed in the Atacama desert in northern Chile, that ... [...]

For the study, the scientists turned to the Sardinia Radio Telescope, ... The full findings were published online in Astronomy and Astrophysics. [...]

It was published online in Astronomy and Astrophysics. ... For the study, the scientists turned to the Sardinia Radio Telescope, a 64-metre fully ... [...]

... with his company SpaceX collaborating with the National Aeronautics and Space Administration (Nasa) to launch scientific probes to the cosmos. [...]

... shaking up math curriculums that have gone unchanged since the Space Race. And advocates argue that schools that teach data science will equip ... [...]

... of a U.S. House Committee on Science, Space and Technology hearing last ... to 5G mobile providers despite the scientific community's misgivings. [...]

So, what exactly has the nation's top space agency accomplished over the years ... While it was a time of tragedy for the space agency, the shuttle program ... The orbiting laboratory has been home to scientific research and discovery ... [...]

It will give the Russian side of the ISS expanded science facilities, crew quarters, and a new airlock for spacewalks. Nauka also features a new docking ... [...]

Nauka is 14 years late, but it brings new science facilities and extra space for Russia's cosmonauts. Nauka is set to dock to the ISS on Thursday morning. [...]

Enough to have a more enlightened look at the density of dark matter which gives the rate, slow or fast, of the formation of these clusters. Source. [...]

... dark matter and dark energy or gravity theory and black holes). The best realize that for every answer they find, a dozen more questions are raised. [...]

Man's new best friend: What cats can teach us about human genetics and precision medicine
28 July 2021

Cats have been found to have genetic diseases related to dysfunction of their genetic dark matter, making them a potential model organism for this type ... [...]

He longed for cern 's Large Hadron Collider to find evidence of dark matter. It caused him lasting frustration that Congress in 1993 had cancelled the ... [...]

... were fearlessly tackling the shadier side of life, then Lou Reed's New York indie outfit was mining musical dark-matter in the dead of night. With their ... [...]